Oh, we needed a laugh to end the week.

From the Financial Times: “Janet Yellen has stressed the importance of central bank independence in her first public remarks after Donald Trump’s election victory… Ms. Yellen said it was ‘critically important’ that central banks had the freedom to make judgments about how best to pursue their goals. Her remarks followed attacks during the election campaign by Mr. Trump, who claimed the Fed had kept interest rates low to help the Obama administration.”

Heh… Anytime this topic comes up, we recall words attributed to the hapless Arthur Burns, who ran the Fed during the Nixon administration and set the stage for the near-hyperinflation of the late 1970s.

The story goes that he was asked by a German reporter why he pursued such a reckless policy. His reply? A Fed chairman has to do what the president wants or else “the central bank would lose its independence.”

But as long as the topic of Trump and the Fed has come up, it’s worth a few reflections going into the weekend…

“Right now the world economy is on a knife edge,” says Jim Rickards. “Extreme inflation and deflation scenarios are equally probable depending on how Trump’s economic policies are implemented, and on the Fed’s policy reaction to those policies.”

We’ve spilled a fair amount of digital ink in recent days on “Trumpflation” — the president-elect’s colossal public-works spending proposal that would put Uncle Sam ever deeper in hock, with the Fed simply printing “helicopter money” to cover the new debt.

“The Trump team,” Jim explains, “claims this spending can be financed with higher growth from his proposed tax cuts and his plans to reduce regulation.”

So we’re back to “supply side” economics and the “Laffer curve” — which tells us the deficit won’t blow out as long as long as economic growth is strong enough to generate more tax revenue.

But that didn’t work out so well the last time it was tried, during the presidency of Bush the Younger. Remember the 2001 and 2003 tax cuts? They were supposed to generate so much growth and tax receipts that we wouldn’t have to worry about the cost of the Iraq War or the Medicare prescription-drug program.

Instead, Bush doubled the national debt to $10 trillion and consumer prices roared higher — before they crashed during the Panic of 2008.

“Even if we get higher growth under the Trump plan, much higher deficits are inevitable,” Jim says. “This comes at a time when higher deficits are in the cards anyway because of baby boom retirement claims for Social Security and Medicare. If the Fed accommodates higher deficits with easy money and negative interest rates — so-called ‘helicopter money’ — then inflation is a near certainty.”

But then there’s the deflationary side of that knife edge. We caution that Trumpflation is no sure thing. The Fed might assert a bit of independence after all.

“It is also the case that higher government spending in the eighth year of a recovery with an initial 100% debt-to-GDP ratio will not produce much real growth. If the Fed reacts to deficits with high real rates, the U.S. economy could tip into a recession. There are already strong deflationary forces in the world arising from debt deleveraging, a dollar shortage, technology and demographics.

“Also, a strong dollar resulting from higher rates will increase the foreign exchange value of the dollar, import deflation and make dollar-denominated debt owed by emerging markets unpayable. This could lead directly to an emerging-market debt default crisis worse than the 1980s crisis in Latin America.”

On the side of the deflationary argument are these facts: This morning, the dollar sits at another 13-year high… and yesterday, Ms. Yellen reiterated plans for an interest rate increase “relatively soon” — which nearly everyone interprets as “next month.”

“In between, investors should hold about 30% cash, which reduces overall portfolio volatility and gives the holder optionality to pivot one way or the other when visibility improves. The complete barbell would have 35% inflation protection, 35% deflation protection and 30% cash.”

Jim cautions this isn’t a set-it-and-forget-it approach. “It requires continual monitoring and updating based on market developments. As visibility improves, the time will come to tilt toward inflation or deflation protection, but for now, the balanced approach is best.”

[Ed. note: We caution the barbell is a near-term thing. One of the highlights of Jim’s new book, The Road to Ruin, is what he describes as “my frightening finding about what’s coming for the economy and the market in 2017. The U.S. government granted me a special clearance to report, which led me to the terrible conclusion I reveal publicly for the first time on Page 98.”

As a reminder, when you order your copy through Agora Financial, your copy comes with a bonus chapter spelling out Jim’s favorite road map for the severe bear market he sees coming. The cost? All we ask is $4.95 for shipping. If you haven’t claimed your copy yet, what are you waiting for?]

The major U.S. stock indexes are treading water as the week winds down. The Dow is off about 30 points, back below 18,900. But small caps are powering ahead, the Russell 2000 up a quarter percent.

The only economic number of note is the leading economic indicators from the Conference Board. This composite of 10 supposedly future-foretelling numbers rose 0.1% in October. In isolation, the number doesn’t mean much, but on a four-year chart, it’s apparent we’re on the downslope of the post-2008 expansion… 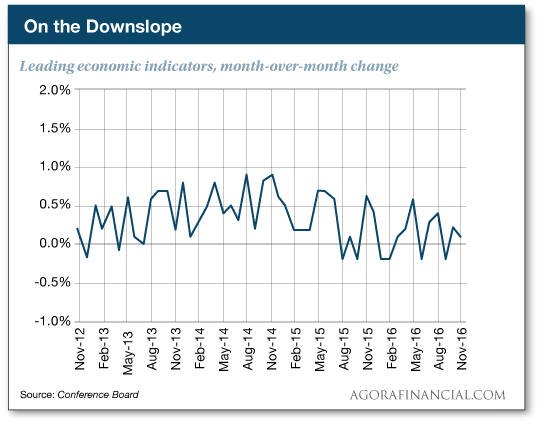 From the “No Inflation Here! Department”… The cost of Thanksgiving dinner is back below $50, in the estimation of the American Farm Bureau.

Feeding a family of 10 will cost $49.87 this year… compared with the record $50.11 last year. Supposedly, if you adjust for inflation, the meal is its most affordable since 2010.

The figures don’t square with your experience, you say? Well remember, the Farm Bureau is a trade group that wants to tout how affordable its industry’s products are — even if that means lowballing the figure with factory-farmed turkey and store-bought pie crust. And never mind cost of the booze!

Are you paying a mere $50 for Turkey Day? Share your experience with us. We had a lot of fun with this a couple of years ago. It keeps the mailbag lively during a holiday-shortened week… when we’d just as soon not have sniping about, say, Fed policy or infrastructure.

Your editor gave up coin collecting around age 12… but this story still strikes me as tragic.

Police in Torrington, Connecticut, say a man stole a coin collection worth $8,000 from his dad… and ran it through a CoinStar machine so he could scrape together $60 to buy crack.

Leonard Rinaldi, who’s 53, is charged with larceny. “Authorities said they have video of Rinaldi at the CoinStar machine,” according to the Fox affiliate in Hartford, “and that many of the coins — that were not rejected by the machine because of their silver content — have been recovered. Police said they don’t know where the rejected coins ended up.”

“The main priority of Interstate Highway System was not originally intended for folks or trucks to use,” a reader reminds us on the subject of infrastructure.

“Ike initiated the Interstate Highway System as a result of WWII showing that the U.S. had no way to reliably move troops and materiel over long distances. Rail was vulnerable, and the C5-A didn’t exist. The Interstate Highway System solved the problem — at least until the politicians got hold of it and screwed it up for their political advantage.

“Given the traffic jams on the interstates that go through most major cities (never intended), we’d be better off with mule trains going overland…”

On the topic of self-driving cars, a reader writes: “We have all heard about how Uber, among others, is pushing for driverless everyday cars, thus leaving thousands of Uber drivers without jobs (wonderful, isn’t it)? But — and this is a BIG but — what will become of the trucking industry?

“There are fuel tanker trucks, semitrailer trucks delivering all kinds of goods, cement mixer trucks used in construction, ambulances that need EMTs on board, tow trucks responding to accidents and on and on. My question is this: Have the greedy geniuses that are developing this ‘wonderful’ technology addressed the above concerns?

“And what will happen in case of a gigantic EMP disruption, such as an enemy attack to the U.S. or a disruption from a superstrong solar flare? Will the self-driving vehicles cease to function properly (causing unimaginable mayhem), or will they still function properly? I have not heard much discussion concerning these possible events.

“Am I the only person trying to stay one step ahead of such coming problems or are there intelligent-enough guardians of our society’s well-being that are preparing solutions to these possible problems? Please tell me that there are! I have my doubts.

“I challenge The 5 to answer this important issue. Have at it!”

The 5: We have no frickin’ clue. There. That’s our answer.

But that’s the beauty of capitalism — there’s a spontaneous order, some might even say a higher intelligence, that sorts all these issues out without me or a Cabinet secretary or a commissar having to micromanage it all.

No, it’s not a seamless process. Some jobs become obsolete, while new ones come into existence. That’s how it’s always been, ever since humans began progressing from the hunter-gatherer stage. But if government can stay out of the way — yes, that’s a big if — we’ll be fine.

Oh, and we’re not much worried about EMPs, either. Really, the North Koreans have the know-how to loft a nuke into position at just the right altitude above Nebraska to wipe out the power grid nationwide?

Assuming Kim Jong Un were so motivated — and that’s a big assumption itself — it seems to us smuggling a nuke across the Pacific into LAX and detonating it would have just as much of a disruptive effect on Americans’ day-to-day lives, and for a hell of a lot less R&D cost.

Big solar flares might be another matter. But EMPs are a pseudoscientific fantasy, the right wing’s version of climate change.

“Jeez, you libertarians don’t mind fraud and dishonesty?” a reader writes after our brief riff yesterday about the Krispy Kreme blueberry doughnut lawsuit. “Yeah, it’s only a doughnut, but it’s a)&$@ lie!”

“Maybe you should list the news/sales ratio of The 5 and see if it is properly called a newsletter or 60% advertising glazed with 40% factoids.”

The 5: Man, it must be hard to go through life taking yourself so seriously…

Already, dozens of tiny marijuana firms have begun skyrocketing by 100%, 300%, 500% and higher. This is your chance to turn a single $50 bill… into an absolute fortune.

But you need to take action BEFORE Jan. 1…