Now, there’s a monetary kick in the teeth: Robert Mugabe, the aging dictator of Zimbabwe, just removed another prop beneath the U.S. dollar.

You remember Zimbabwe, right? The country that in 2008 topped Weimar Germany in the annals of “epic hyperinflation”? Where a currency note with 14 zeros on it could buy maybe four loaves of bread?

As the calendar flipped to 2009, the nation abandoned the Zimbabwe dollar and adopted… the U.S. dollar.

Well, when you hit rock bottom, you have to start somewhere.

In reality, the dollar was one of several foreign currencies that were legal tender in post-crisis Zimbabwe. So was the rand, the currency of neighboring South Africa. Makes sense.

“The [Chinese] yuan was later added to the basket of the foreign currencies,” says The Guardian, “but its use had not been approved yet for public transactions in the market dominated by the greenback.”

That’s all changed now after Chinese President Xi Jinping paid a call on Mugabe this month.

The yuan is now legal tender in Zimbabwe. In exchange, the Chinese government is canceling $40 million in debt owed by Zimbabwe’s government.

It’s all part of Mugabe’s “look East policy.” As The Guardian explains, “China is Zimbabwe’s biggest trading partner following Zimbabwe’s isolation by its former Western trading partners over Harare’s human rights record.” (Don’t Western leaders ever figure out the futility of sanctions? Guess not, if it took 54 years for Washington to come to its senses about Cuba.)

So… is this how history proceeds?: 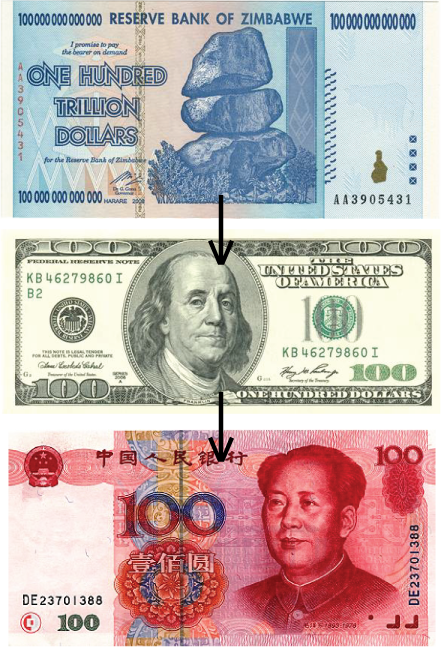 True, Jim Rickards says the endgame is the SDR — the International Monetary Fund’s “super currency.” But it’s, ummm, interesting to see how we’re getting there.

Sorry to interject that disquieting thought two days before Christmas. But the weather here on the East Coast doesn’t feel very Christmas-y at all. The forecast in Baltimore still calls for a high of 73 tomorrow. We’re trying to get into the holiday spirit, we really are — there’s a YouTube video of a Yule log on a projection screen in the office today — but it’s proving elusive this morning.

Well, as long as we’re thinking heavy thoughts, let’s see who might be the next victim of the global currency wars.

“The foreign exchange situation in Mexico is a textbook case of the operation and limitations imposed by the Impossible Trinity,” says Jim Rickards.

We explored the Impossible Trinity yesterday. It’s a well-founded theory that says a country can have an independent monetary policy… an open capital account… or a fixed exchange rate. It can even have two of those things at once. But it can’t have all three — markets will punish governments that try to pull it off. (If you missed yesterday’s episode of The 5, you can get up to speed here.)

So let’s check off the boxes with Mexico.

“Mexico also has an independent monetary policy. The short-term interest rate set by the Banco de Mexico is 3.25%, significantly higher than the Fed’s target short-term rate of 0.25%.

“Mexico is trying to peg the peso to the dollar at around 17-to-1. It’s not a hard peg, but it is a policy target. Banco de Mexico conducts up to $400 million per day in currency auctions if needed in order to keep the peso from falling more than 1.5% per day from the previous day’s fixed rate.”

Yep, Mexico’s trying to pull off the Impossible Trinity.

“The effects of trying to pursue the Impossible Trinity are already showing up,” Jim goes on.

“Mexico has lost over $21 billion in reserves so far in 2015. Mexico is not in an imminent reserve crisis, but the trend is worrying. There are limits on how much hard currency Mexico is prepared to lose in order to defend the peso.”

Jim says Mexico has three choices to stave off crisis — close the capital account, give up its monetary independence or devalue the peso.

“It is almost inconceivable that Mexico will close its capital account,” Jim says. “Mexico is dependent on U.S. trade and an IMF backstop lending facility. Both the U.S. and the IMF would strongly oppose closing the capital account. Mexico is highly unlikely to move in opposition to its two largest sources of financial support.”

Abandoning independent monetary policy? As it happens, Mexico raised interest rates on Thursday — a day after the Federal Reserve did the same. But how long can that go on? “The Fed will likely raise rates next March and again in June,” says Jim. “The Mexican economy is already slowing down because of declining growth in its major trading partners, China and the U.S. Raising interest rates only makes the Mexican slowdown worse.”

Conclusion: “There’s only one thing left for Mexico to do,” says Jim — “devalue the peso.”

The move could come as early as next month. “The Mexican Currency Commission (the official body that sets the Mexican exchange rate to the dollar) will meet in late January 2016 to decide on whether to extend the peso support program,” Jim tells us. “The Fed is unlikely to back off its rate hike rhetoric before then, so that’s an opportune time to devalue the peso.”

If you own Mexican stocks, or a Mexico ETF, you might want to think about getting out: “U.S. dollar investors in Mexican stocks will suffer when the peso value of those stocks declines,” Jim believes.

That’s his advice for the most risk-averse investors. If you want to play the trend more aggressively, Jim and his team issued a trade recommendation yesterday to readers of Currency Wars Alert. It has the potential for 150-250% upside over the next 12 months. For access to all Currency Wars Alert trades — and an urgent market update from Jim — look here.

The few traders still on duty today are sending the major U.S. stock indexes up, perhaps giddy that the Beatles catalog will be available on Spotify and other streaming services starting tomorrow.

But the big mover is crude — up nearly 4% on the latest inventory numbers from the Energy Department. As we write, a barrel of West Texas Intermediate is $37.56.

WTI has traded at a discount to Brent for most of the last five years, thanks to plentiful crude from America’s shale patch. But traders might be sensing a change afoot: As we mentioned last week, the new budget deal reached in Washington will allow U.S. crude exports to resume for the first time in 40 years.

The Federal Reserve still can’t get as much inflation as it wants.

The Commerce Department is out this morning with the “core PCE” number — which is the Fed’s favorite measure of inflation. It registers a year-over-year increase of 1.3%. That’s nowhere near the Fed’s 2% target… although perhaps the Fed can take cheer that the number has arrested its decline from earlier this year.

In other economic numbers today…

Just in time for holiday travel, the TSA has put coal in the stockings of privacy-conscious air travelers.

Sorry for another holiday downer, but this one’s hard to ignore.

Ever since body scanners came into widespread use at airports five years ago, travelers have had the choice of “opting out” and instead getting a pat-down.

No more. Guess the agency has to look as if it’s “doing something” after word got out over the summer that TSA agents failed to detect 95% of the weapons and bombs smuggled past them by federal testers.

Here’s what the new regulation says: “While passengers may generally decline AIT [advanced imaging technology] screening in favor of a physical screening, TSA may direct mandatory AIT screening for some passengers as warranted by security considerations in order to safeguard transportation security.”

Uhhh… what might those “security considerations” be? The rules don’t say.

So not only does the TSA get these awesome new powers, it gets to exercise those powers in a totally random and arbitrary way!

The TSA did go out of its way to say the model of scanner that took what amounted to seminude pictures has now been retired. (That was the creepily named “Rapiscan,” from a company that gave a juicy consulting contract to Bush-era Homeland Security chief Michael Chertoff.)

The new rules were published last Friday. No one outside the TSA noticed until investigative reporter Julia Angwin from ProPublica tweeted it yesterday… 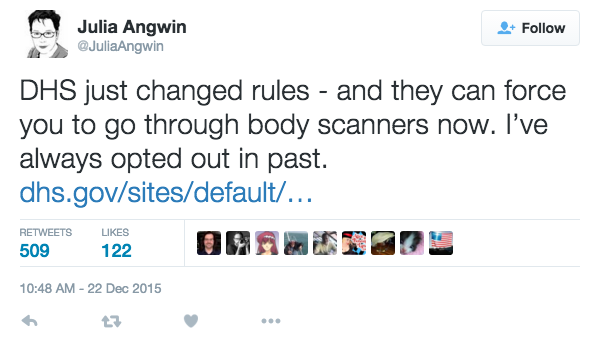 As has your editor, I’ll add. But I’m not much of a frequent flyer.

Be interesting to see what travelers experience in the course of their holiday travel. If you notice anything different or unusual, drop us a line. We’ll share your experiences next week.

“You guys at The 5 will have fun with this, I’ll bet!” writes one of our regulars. “You’ll laugh. You’ll cry. You’ll hurl. This is utterly hilarious.”

The reader sends along a link to a YouTube video in which mush-minded, safe-space obsessed college students are induced to sign a petition for something outrageous — in this case a ban on popular holiday songs including “White Christmas.”

“‘Rudolph the Red-Nosed Reindeer’ was good,” the reader says, “in that he had a disability, so ‘disability’ and ‘animal’ together got double points — and if the guy had been quick enough, he should have pointed out that Rudolf was at least partially ‘red’ — clearly, a communist!”

The 5: You’re not helping us get into the Christmas spirit here!

P.S. While we have air travel on the brain… have you heard about the self-defense tool that fits on your pocket, is as deadly as a gun and is allowed on a plane?

An ex-CIA officer just revealed the ONLY self-defense tool he carries with him wherever he goes. And it has all those attributes — compact, lethal and legal for air travel.

Moreover, it’s only one of over 101 spy secrets he’s revealing to the public in one FREE book.

P.P.S. Here’s something that’ll get your editor into the holiday spirit — a couple of days away from chronicling economic and monetary failure here in The 5.

U.S. markets trade for a half-day tomorrow and are closed Friday for Christmas Day. So we’ll take a break and come back Saturday with our wrap-up 5 Things You Need to Know. The weekday edition of The 5 returns with all-new episodes on Monday.