At the risk of sounding smug… you can’t say we didn’t warn you.

Yesterday brought the largest failure of a mutual fund since the Panic of 2008 — when the Reserve Primary money market fund “broke the buck.”

“Third Avenue Management said on Thursday it was shutting the doors of its $800 million high-yield bond fund because it had run out of money to pay redeeming investors without having to dump bonds at fire-sale prices,” reports the Financial Times.

Yep, the Third Avenue Focused Credit Fund (FCF) has barred the “owners” of its shares from further redemptions. Instead, they’ll get “a stake in a wind-down vehicle that will sell assets in an orderly fashion over time,” reports the salmon-colored rag. The process could take a year or longer.

It’s still not too late to act on the warning Jim Rickards shared with us on Jan. 14 of this year — he said it would take time to unfold — but time is running out.

“The next financial collapse,” he said, “will come from junk bonds, especially energy-related and emerging-market corporate debt.”

Said Jim in January, “If default rates are only 10% — a conservative assumption — this corporate debt fiasco will be six times larger than the subprime losses in 2007.”

By June, we told you how our acquaintance Erik Townsend, the hedge fund manager, was having trouble short-selling the big junk-bond funds HYG and JNK: His broker closed out his positions against his wishes because there weren’t enough shares available to borrow.

As late as Thanksgiving week, we reiterated Jim’s warning: “You should scour your portfolios and sell any bond funds that are stuffed with junk debt.”

So act now if you haven’t already… because there’s a rush for the exits.

Investors pulled $3.5 billion out of junk-bond funds last week, according to Lipper — the most since August 2014.

Now we turn to one of Jim’s big calls for 2016… and he’s making it with the help of an old friend, and a name familiar to many readers of The 5 — adventure capitalist and fellow author Jim Rogers.

Over time, the two Jims have shared a stage at investing conferences on three continents.

“In one of our recent discussions,” says Jim Rickards, “Jim and I talked about commodity prices generally and gold prices in particular. We are both bullish on gold for the long term and see gold prices of $10,000 per ounce or higher in the future.

For Rogers, the drop came as no surprise: “No commodity goes from a baseline to a permanently new high without a 50% retracement along the way.”

It’s a good rule to keep in mind. Jim Rickards calls it “the Rogers Retracement Rule.” 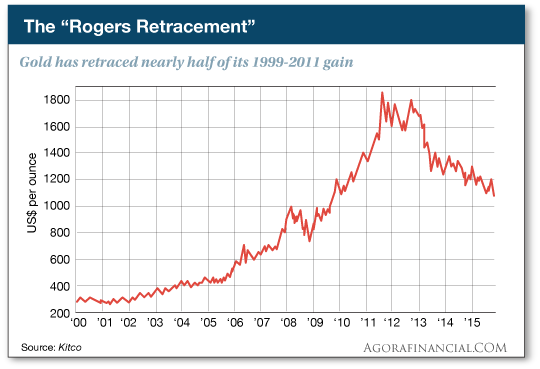 And then during an ugly 15-month stretch, gold got cut nearly half — shaking out a lot of weak hands by the time it bottomed around $105 in September 1976.

After that, gold was off to the races — reaching its epic blow-off high above $800 in January 1980. That’s an eight-fold increase in less than 3½ years.

This time, the 50% retracement has taken longer to play out — more than four years. But seen in the ’70s context, it’s not so outlandish to think gold might reach $10,000 or higher.

[Ed. note: Applying the “Rogers Retracement Rule,” Jim Rickards’ IMPACT system has spotted a short-term currency-oriented play with the potential to double or even triple your money by next July.

Readers of Currency Wars Alert got the recommendation on Tuesday. It’s still not too late to act. Indeed, as Jim explains in this new (and brief) video, now’s an auspicious time to put the IMPACT system to work in your portfolio.]

Major U.S. stock indexes are down meaningfully today for no obvious reason.

The establishment media are chalking it up to falling oil prices. “Major Indexes Fall More Than 1% as Oil Prices Plunge,” Reuters says breathlessly.

Wait a minute — oil was plunging yesterday and stock traders were shrugging it off. These reporters have the attention span of gnat.

Here at The 5, Jonas Elmerraji of our trading desk said on Monday to expect volatility in the run-up to the Federal Reserve’s big meeting next week. That’s what we’ve got this morning: The S&P 500 is down 25 points as we write, at 2,026. Jonas tells me this morning the level to watch is 2,020 — the S&P’s low in November. For the moment, it’s holding…

The two big economic numbers of the day reinforce the Fed’s apparent determination to raise rates next week.

And as we’ve intimated much of the year, auto sales are the only reason retail sales as a whole look so strong.

Blogger and money manager Barry Ritholtz reinforces the point this week: Retail sales “have been fairly soft, disappointing or whatever measured phrases like ‘OK, not terrible, but not great’ that analysts and commentators favor to indicate mediocrity.”

But cars and light trucks are the big exception — selling at a record annualized pace of 18 million.

True, cars are built better and last longer these days… but the hangover from the “Great Recession” surely helped drive the number up.

“The third, and in my opinion most important, reason for the sales boom has been credit availability,” Mr. Ritholtz goes on.

We first issued a heads-up about subprime auto loans in the spring of 2013. By the summer of last year, we were sharing tales of fog-a-mirror qualifications to get an auto loan, just like home loans in the previous decade.

“Unlike home mortgages and even traditional credit cards,” Barry affirms, “loans for autos have been readily available. This is true regardless of factors that would prevent the average shopper from qualifying for a mortgage.”

And there’s this, Mr. Ritholtz reminds us: “It takes nearly 500 days from default to foreclosure to repossession of a home. On the other hand, the timeline for repo’ing a car is nearly instant.”

“Byron, when do you think uranium prices will recover?” a reader recently asked our natural-resource maven Byron King.

For perspective, Byron shares this chart. It shows uranium is nearly as “radioactive” as every other commodity of late… 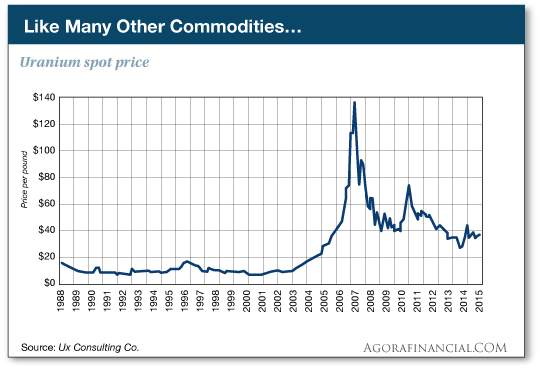 Emerging-market growth and the 2000s commodities boom sent uranium to crazy highs in 2007-08. Then it collapsed along with everything else. Then it attempted a comeback that was aborted in March 2011 — the moment of the Fukushima nuclear disaster in Japan.

“In the past few years,” says Byron, “I’ve heard all manner of really good stories about how and why uranium prices ought to move higher.

“There’s growing China demand for uranium and nuclear power, of course. ‘Rest of world,’ too, such as nuke demand from the Middle East and elsewhere. Shortages of uranium due to the end of a Russia-U.S. deal to melt down Cold War-era warheads. Return of Japan nuclear reactors to service post-Fukushima. Steady and strong uranium demand in the U.S., to include a current utility uranium buying spree that comes about every seven years or so.”

And still the price is stuck.

“Another way of looking at it is that the lack of price movement has shuttled many uranium-based investment ideas into the back shadows of marketland,” Byron goes on.

“Share prices are down. Ongoing tightness in the uranium space has forced existing mine plays to get more efficient, to be better and better. Yet the market hasn’t rewarded this; indeed, the market has punished everyone.

“Lack of investor interest in uranium plays has also starved the ‘startup’ sector of funds. Very few new companies have formed up to go out and drill up the ‘next big thing.’ It leaves only a small number of players on the overall field.

“All in all, uranium is a beaten-down sector that offers open-ended opportunity for long-term investors with patient money that can ride a few more ups and downs.”

Byron’s not ready to pull the trigger on a uranium play in Outstanding Investments… but his readers will be first to know when it’s time.

Strange startup idea of the day — a betting pool for successful marriages.

It works like this: If you’re about to get married, you sign up at the site SwanLuv. SwanLuv’s experts ask a few questions about your relationship and then decide if you’re worthy of a loan up to $10,000.

If you stay married, you keep the money forever. If you divorce, you pay it all back — plus interest.

“It comes back to statistics,” CEO Scott Avy tells GeekWire. “We’ll have the right odds, so we’ll be OK. But they won’t be so crazy that no one wants to do it.” 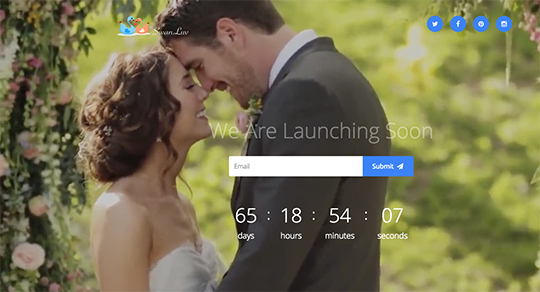 Avy and his co-founder are the firm’s only employees right now, but they’re talking to a group of angel investors…

“SwanLuv is taking applications now,” says GeekWire, “and hopes to begin making its first payments this February, once it has time to finish raising outside funding. It may take years for the company to see returns, but Avy said eventually, couples will start to break up, and he’s confident SwanLuv will become profitable.”

[We seem to be saying that a lot today…]

“I was unable to sign up for David Stockman’s event next Monday,” a reader writes — “it keeps telling me there is an error.”

The 5: We had electronic gremlins yesterday. The good news is that we successfully snagged the email addresses of everyone who tried to sign up.

You’ll get a confirmation email later today, if you haven’t already. If you haven’t received it, by all means contact our fine customer service folk. One way or another, everyone who tried to sign up yesterday will have access to David Stockman’s exclusive briefing next Monday evening at 9:00 p.m. EST.

Late to the party and don’t know what we’re talking about? Click here.

P.S. As we get closer to hitting the “send” button, crude has sunk further below $36 and the Dow is now down nearly 300 points on the day.

It’s volatile times we’re in. You can hide out in cash that keeps losing its value… or you can make volatility your friend.

If the latter sounds more attractive, we urge you to consider this.