In Search of Safe Havens

Look who’s loading up on gold: “European investors are increasing purchases of gold,” Bloomberg News informs us, “as Greece’s turmoil boosts the appeal for an alternative to the euro.”

Before we launch into today’s episode in earnest, we’re compelled to say this: Nothing about the Greece situation has meaningfully changed in the last 24 hours.

Financial websites and the business TV channels are in full-on “breaking news” mode, breathlessly telling us when some deputy finance minister left a meeting room for a smoke break. It’s all noise, no signal.

We sought out more intelligent coverage from international sources, but all we learned watching the business reporter on Germany’s Deutsche Welle TV is that the stereotype about European men having zero fashion sense is true… 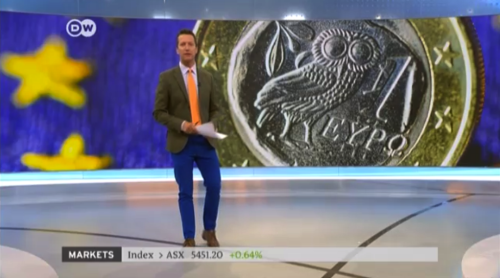 Bet he’s got a drawer full of Speedos, too…

The Greek government has acknowledged it won’t make its debt payment due to the International Monetary Fund at day’s end. You can count on all the parties involved figuring out a way to avoid calling it a “default” while they await the outcome of a referendum in Greece on the bailout terms Sunday.

And so we wait… and try, in the meantime, to tease out some longer-term implications.

The Bank of Greece has suspended sales of gold coins this week — coinciding with the bank holiday and maximum ATM withdrawals of 60 euros, or about $66.

Greek buyers helped propel sales over the weekend at CoinInvest, a Frankfurt-based online bullion retailer. French and German buyers piled in too. Sales volume was the highest since the “bail-ins” in Cyprus two years ago.

And at the U.K. Royal Mint, buyers anticipating trouble snapped up sovereign gold coins during June at a pace double that of the previous five months.

While gold priced in dollars peaked in September 2011 and is down 37% since — this morning, it’s around $1,172 — gold priced in euros peaked a year later and is down only 24%. The big pop at the start of 2015 coincides with the Swiss National Bank’s decision to de-peg the Swiss franc from the euro. 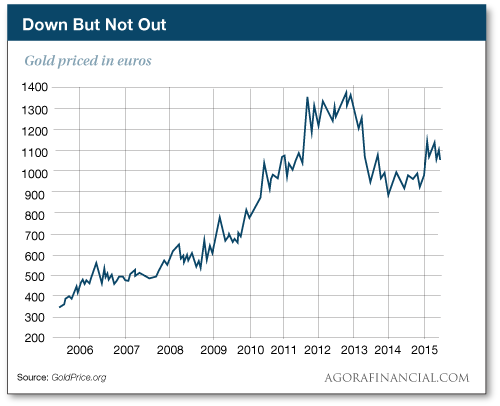 “Investors are searching for a safe haven,” Bloomberg sums up Europe’s gold demand.

Of course, a better time for safe-haven buying is before a panic sets in. Think about it: How likely is it that the world will avoid a major economic hiccup — something much more serious than Greece — within the next five years?

When gold becomes a safe haven, silver often becomes the way to earn outsized profits. And now might be as good a time to buy as any.

Silver priced in dollars sits near lows last seen in early 2010 — at last check this morning, $15.47 an ounce.

A number precious metals experts watch closely is the gold-silver ratio — literally the price of gold divided by the price of silver. The ratio sits near highs last seen in 1997, 2003 and 2009. 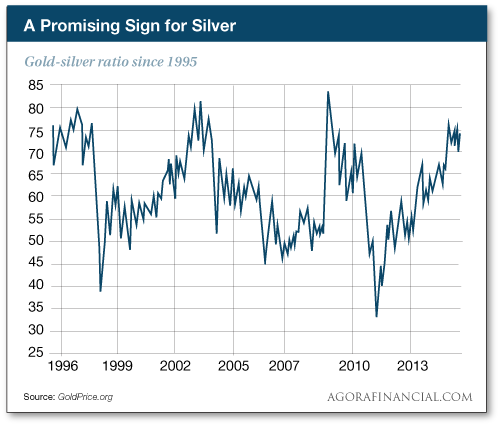 Any of those years would have been excellent times to buy silver. You could have picked up gains of 70%, 200% or even more.

If the gold-silver ratio climbs down from its present 75 to a more “normal” 60, that implies a silver price rising from this morning’s $15.47 to nearly $20. And that’s assuming the gold price doesn’t move at all. If gold rises, that jump could be even more lucrative.

And remember what we said on Friday: The fast-growing solar-panel industry is on track to use up 10% of global silver production this year… at a time silver supply is falling short of demand.

Silver looks like an attractive five-year speculation from here…

A funny thing happened amid yesterday’s market turmoil: The industrial metals as a group took a hit… but copper held its own.

That’s despite bad news from China, which consumes 40% of the world’s copper. Over the weekend, China’s central bank opened up the monetary spigots again in hopes of arresting the slowdown in China’s economy. It didn’t goose Chinese stocks, though: Yesterday, the Shanghai Stock Exchange entered bear-market territory — down 20% from its highs earlier this month.

So why didn’t copper tank too? The Financial Times suggests it was “Chinese hedge funds scrambling to buy back bearish bets against the metal, as they faced rising margin calls from the equity market.” One fund alone slashed its bearish copper bets in half. 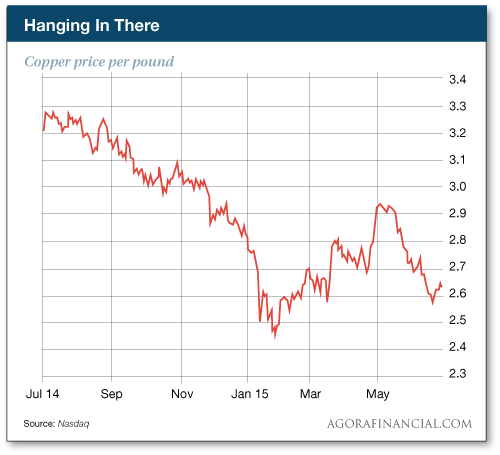 As with silver, the renewable energy boom will prove a big source of copper demand over the next five years. Every megawatt of electricity produced by a wind turbine demands 3.6 metric tons of copper. The typical electric car has three times as much copper — 165 pounds — as the typical gasoline-powered car.

The major U.S. stock indexes are getting their bearings after yesterday’s whacking.

Greg Guenthner of our trading desk is getting cautious, urging his Rude Awakening PRO subscribers to lighten up on their short- and medium-term trades.

“”Stocks have been choppy all year,” he reminds us. “After trading in a tight range for weeks, we saw stocks within spitting distance of all-time highs last week. Now the S&P is in the red for the year. But frankly, it doesn’t matter if it’s because of Greece or if Saturn’s moons are perfectly aligned. We’re in the danger zone — and it’s time to act.

“Sell when it’s time to sell, and don’t get cute. Obey whatever stop losses you’ve set without exception. You can’t wish your stocks higher.”

Crude is recovering a bit after selling off yesterday. At last check, a barrel of West Texas Intermediate fetches $58.92.

But Brent will remain the international benchmark only so long, says our resident oil field geologist, Byron King.

Brent achieved that status during the 1980s when oil development in the North Sea was getting underway in earnest. (It’s named after the brent goose.)

Today, the Brent platform produces only about 2,000 barrels per day, but the tradition persists: “Tens of millions of barrels of oil output from across Europe, Africa and the Middle East are priced daily relative to the Brent quote,” says Byron. “Due to Brent pricing power, even oil from Russia gets priced at Brent levels, despite Russian efforts to use their own ‘Urals’ quote.”

And the Russians are trying to make inroads, as Byron learned at a recent Platts oil summit in London.

“A representative from Russia’s Rosneft Oil Co. offered a subtle but blistering critique of the underlying basis for a ‘so-called Brent’ quote. ‘First, there is almost no Brent oil,’ he said in reference to the Brent field’s daily 2,000-barrel output. ‘By comparison,’ he added, ‘nearly one-third of Europe’s oil comes every day from Russia, well over 3 million barrels of crude and refined products.'”

Can Russia get its way? “One rather large carrot that Russia is dangling,” says Byron, “is the prospect of North Sea-oriented oil producers and service companies working further north, in Russian Arctic waters. ‘North Sea production is falling,’ declared the Russian rep. ‘Russian offshore could offer an opportunity to shift services eastward,’ he added, mincing no words.

“I suspect that over time, Brent will lose its luster,” Byron concludes, “and it becomes more likely as Russia waits in the wings to offer an alternative methodology. When that transformation occurs, I suspect that ripple effects will doubtless impact use of the U.S. dollar as well. That’s another story entirely.”

“I’m sure Jim Rickards will be right rather than me,” writes one of our regulars, after Jim Rickards’ remark yesterday that Germany “miscalculated” in its dealings with Greece and Greece will stay in the euro one way or another.

“After all, he does go to meetings with the CIA, the Pentagon, Fedheads, etc., whereas I only go to boring meetings discussing mundane business endeavours absolutely no one would care about, unless they were directly involved in the mind-numbing tech minutiae I deal with.

“However (notice I avoided using ‘but’!), I **will** say this: Germany *has* made more than one error that *did* get just slightly out of hand. Operation Barbarossa comes to mind, as does Herr Havenstein’s printing press, for starters.

The 5: Well, Jim did acknowledge during his Bloomberg interview that Germany has been known to miscalculate along those lines before, but we excised that from our own coverage yesterday to stay on point. Heh…

“I’ve been following the complaints about Agora’s lengthy sales pitches and your responses,” a reader writes. “Personally, I find long copy annoying, but I also understand the legitimacy of your responses. As you note, I have the option of not clicking the links or, if I do, of quickly scanning them to see if I want to read them in detail.

“So why am I writing? Simple. Because there are two things I find annoying that you can fix without changing anything significant in the sales pitches:

“1. Add a volume control to the videos. It’s much easier to adjust the volume with a screen click than it is to adjust computer volume for the ad and then adjust it again for normal use.

“2. Do not write email headlines that are not directly supported by the copy. An ad I received yesterday is an excellent example. The headline in the email was ‘6 Beer Brands That Could Be Silently Killing You.’ I drink beer, so you got my interest. It was very disappointed to find that the word ‘beer’ appeared only once in the copy and had no connection I could discern to the subject matter.”

The 5: We’ll pass along your suggestion to the production folks about the volume control. And you raise a good point about making sure the main copy follows through with the promise raised in the email. (Judging by yesterday’s sales figures, you weren’t the only one who felt that way!)

“Seems as though the chronically complaining crowd has once again forgotten that clicking on the evil links in your newsletters is optional,” writes our final correspondent.

“Actually, so is their whining about such a simple matter, but maybe this is what makes them such an entertaining bunch. Thanks for The 5, and for the optional links.”

P.S. Did you know thousands of Americans travel year-round and live where they want?

They fly anywhere in the world for FREE… sleep for free… eat for free… get VIP treatment for free.

And when money is needed, they know ways to make money from anywhere.

For the first time ever in one place, one new (and FREE) guide reveals all their secrets. And we have 444 copies to pass out today.

Grab your copy of this FREE guide and never go without wherever you go. Click here before they’re all gone.