The Fed is Trapped

The most pointless guessing game among the financial punditry has resumed full throttle.

“Federal Reserve policymakers,” reports USA Today, “said they could begin raising interest rates before inflation starts to pick up, according to minutes of their Dec. 17-18 meeting.”

With that as the backdrop…

“I think the biggest surprise in 2015 may be that the Fed doesn’t raise interest rates at all,” says Jim Rickards, resuming our team’s 2015 forecasts today.

We shared Jim’s outlook in brief as 2014 wound down. Today, we dive into the particulars: “If you’re going to offer an outlook,” he explains, “it’s always good to know where you’re starting and then project from there.

“Right now, the markets fully expect an interest rate increase from the Federal Reserve. The only debate is when it will happen. You have people who say March and other people who say June or July. Some of them a little bit later.

“The Fed is saying a couple of things right now,” Jim goes on: “They say the U.S. economy is getting stronger and that they want to normalize interest rates.

“With a nod and a wink and tweaking their language, they’ve signaled that they’re going to raise rates in 2015. That’s what the market is set up for.

“This explains why the dollar is so strong. People expect Europe is going to print money and the Fed is going to raise interest rates or tighten. As an investor, you’d rather be in the dollar under those circumstances, because you are going to get a higher return.

“But I think what a lot of folks are missing is that the data are coming in very weak.”

That is, there’s less than meets the eye with the job numbers the Fed monitors so keenly: Sure, weekly first-time unemployment claims finally are back under 300,000 — a “normal” figure when the economy is growing at a healthy clip. But we’re gaining part-time jobs… and losing full-time jobs. 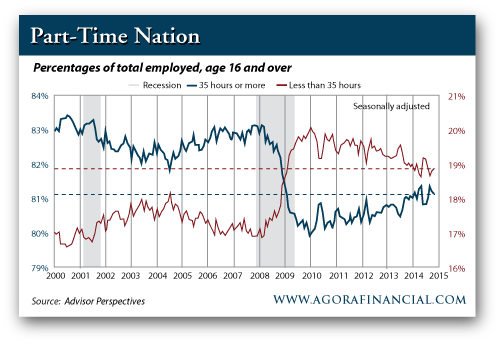 “The other problem is the strong dollar. As I said, the dollar is up because people think the Fed is going to raise rates, but a strong dollar is deflationary.” Thus, the inflation numbers are coming in consistently below the Fed’s 2% target.

“So the setup is as follows. The Fed says they want to raise rates… and that they want inflation too. But deflation is stronger, and if they raise rates, they’re going to get more deflation. So how does that work?

“There are only two ways out,” Jim goes on.

“One is the Fed does raise rates — remember, that’s what the market expects. If the Fed does that, watch out below — we’re going to have a major recession. In that scenario, the U.S. economy is going to be thrown right back into recession, because the deflationary powers are too strong. Raising rates strengthens the dollar. It makes the deflation worse.

“I think, however, the Fed will see that fact — maybe during the first quarter of 2015. They’ll back away and not raise rates. So my expectation, contrary to what most people in the market say, is that the Fed won’t raise rates in 2015.

“But right now, the market thinks they will, so it’s set up for a shock. If by March or April — somewhere in there — the data are weak and the Fed starts to signal they’re not going to raise rates, all of a sudden, everything could flip. That could be very bullish for oil, gold and hard assets.

“If the Fed doesn’t raise interest rates, investors will pile back into Treasuries,” Jim concludes.

Treasuries were the standout asset class of 2014. Sure, the S&P 500 rose 12%. But TLT, the long-Treasury ETF, rose 24% — confounding the “expert consensus” at the start of 2014 that said interest rates had nowhere to go but up and Treasury prices nowhere to go but down.

“Even if the Fed raises rates in 2015,” Jim adds, “the rate hike would crush other risky assets, which would also send investors running to Treasuries.” Win-win.

[Avalanche watch: “The cost of insuring Russian bonds against default rose to the highest level in almost six years,” Bloomberg reported this week, “on speculation a cut in the nation’s credit rating to junk is imminent.”

As you might know, Jim Rickards is on alert for “snowflakes” that could trigger the financial avalanche he thinks is inevitable.

It was a Russian default that nearly broke the back of the markets in 1998. Emphasis on “nearly.” Few remember it now, other than a handful of Wall Street insiders. But Jim remembers it all too well… because he was in the room as negotiators from the Fed and the nation’s 14 biggest banks narrowly averted disaster.

Would a new Russian crisis reverberate around the world? And could the masters of the universe steer their way clear one more time?

Readers of Rickards’ Strategic Intelligence will be privy to Jim’s insights during his next exclusive online briefing Monday at 10:00 a.m. EST. At these monthly events, Jim dives into issues he doesn’t talk about when he’s interviewed on CNBC. And he conducts a “lightning round,” answering readers’ most challenging questions.

If you’re not yet a subscriber, you can join up at this link and you’ll receive instructions about how to take part in the event Monday. No “long-winded presentation” to watch, either…]

So much for the sell-off that began 2015. Stocks are screaming higher this morning, the Dow up nearly 300 points as we write and the S&P erasing all of its early-year losses, now at 2,060.

Explanations? You want an explanation? Try this on for size, from TheStreet: “Stock Markets Hover at Session Highs in Fed-Inspired Rally.”

Nice try, no cigar: The S&P closed yesterday at the same level where it sat when the Fed minutes were released two hours earlier.

That’s the hazard of establishment media looking for reasons behind every little market move. Sometimes there are no reasons…

“I think 2015 is going to be a big year for what’s known as the ‘Internet of Things,'” says Ray Blanco of our tech team.

Ray got us acquainted with the Internet of Things last August — a proliferation of Internet-connected devices like Wi-Fi-enabled cars that message your mechanic when something goes haywire and Wi-Fi-enabled coffee makers that order you new coffee when you’re running low.

“This is the next big phase of growth for the Internet,” Ray says now, “where what we normally consider inanimate objects are going to become networked and intelligent. It’s going to create a lot of growth for companies participating in the space.”

The original buildout of Internet infrastructure delivered huge gains in the late 1990s to the likes of Cisco and Microsoft. The next huge phase is now, Ray tells us.

“I think this is going to be the year when investors really start paying attention to what’s going to be another big explosion in Internet growth as the Internet of Things plays out in the market.

“All these smart devices are going to be uploading data. That means they will be stored somewhere, so that’s also going to be very good for select cloud computing companies.”

Ray has a basket of stocks to help you take advantage — making up to eight times your money, as Cisco did some 15 years ago. If you missed out then, you don’t want to miss out now.

Business is hurting these days for bail bondsmen in New York — down by 50% since Christmas.

“Definitely, it’s been very slow,” says Miguel Rodrigues, co-owner of David Jakab Bail Bonds. “A lot of attorneys are having issues as well,” he tells Reuters.

As you might be aware, an ongoing tiff between New York cops and Mayor Bill de Blasio has led to something of a “work stoppage.” Arrests are down by about half compared with this time a year ago.

A few days before Christmas, the New York Patrolmen’s Benevolent Association issued a bulletin: “Absolutely NO enforcement action in the form of arrests and or summonses is to be taken unless absolutely necessary and an individual MUST be placed under arrest.”

Which implies not all arrests and summonses are “absolutely necessary,” right? Interesting…

“I am far from being the wisest investor in the world, but I would think most investors never put all their money into a single class and hope for the best,” a reader writes — weighing in on Jim Rickards’ guidance that you need to prepare for both inflation and deflation.

“All of us have hedges, maybe a put option or an inverse ETF, just in case we make a bad call. Investing in commodities is really the inverse of holding cash, so doing some of each will protect you no matter which way the market goes.

“I think Mr. Rickards’ advice is worth noting in today’s marketplace for one reason. We do not have a free and honest market. It is manipulated by the government, via the Federal Reserve, so trying to predict the immediate future is really a 50/50 proposition.”

“It has been speculated,” a reader writes after yesterday’s oil-themed episode, “that the Saudis and the USA conspired to drive down oil prices for various reasons.

“Any of which could be true, but I think it bears taking a look at what someone had brought up before. The shale boom in the USA was affecting the ‘petrodollar’ and the dollar’s status as the world reserve currency.

“Could it be that the manipulators have underestimated the damage that would result from pushing down the price of oil in an attempt to rescue the ‘petrodollar’?

“Or — and this is even scarier — do they understand what is happening and come to the conclusion that allowing the economy to suffer in the near term was preferable to seeing the ‘petrodollar’ die and the effect it would have on the USA?”

The 5: We too can only speculate… and draw from history.

President Reagan signed National Security Decision Directive 66 in 1982… when crude was $30 a barrel. NSDD 66 aimed to weaken the Soviet Union by bringing down the oil price. CIA chief William Casey reckoned every $1-per-barrel drop in the oil price cost the Soviets as much as $1 billion a year.

P.S. One more time, Jim Rickards’ next online briefing exclusively for Agora Financial readers is next Monday at 10:00 a.m. EST. The topic: How Russia nearly wrecked the financial world in 1998… and how disaster might not be averted if Russia sinks into deeper trouble during 2015.

Access is free to all subscribers of Rickards’ Strategic Intelligence. You can join up here.